Teas these days are becoming more and more adventurous. Sure people will always like their “cup of splosh”, but sometimes something different is worth experimenting with. Afternoon teas are the thing to do, who doesn’t like the idea of sitting down to being served finger sandwiches with various fillings, mini cakes, scones with delicious jam and thick cream? Of course this has to be accompanied by a pot of tea and as the food is special so should the tea be.

Earl Grey has been a popular blend since around the 1820’s. It’s believed to have been named after Charles Grey, who was a British prime minister in the 1830’s, after he received a gift of the tea flavoured with Bergamot oil.

It was originally produced by a company called Jackson’s of Piccadilly, who claimed that they were given the recipe by Lord Grey in 1830.

A survey in the UK in 2010 found that a fair amount of people associated the drinking of Earl Grey tea with being posh. 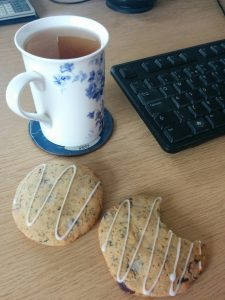 So if you’re feeling particularity posh, or even wish to appear so, it’s worth trying these delicately flavoured biscuits. For those people who like me, don’t actually drink tea, they are offset with the addition of dark and white chocolate.

The original recipe called for Lady Grey tea which has a more delicate flavour, however I found that it wasn’t delivering enough of a “punch”, so experimented with other brands before finally choosing one that worked. Currently I use one produced by Fortnum and Masons of London and although it’s stronger, most people who try the biscuits are surprised by the light taste as they are expecting them to have an overpowering flavour.

So what if I’ve got a bit of dough left over at the end of baking a batch, I need to taste them to make sure they’re OK. after all isn’t that the chef’s prerogative?

This website uses cookies to improve your experience while you navigate through the website. Out of these, the cookies that are categorized as necessary are stored on your browser as they are essential for the working of basic functionalities of the website. We also use third-party cookies that help us analyze and understand how you use this website. These cookies will be stored in your browser only with your consent. You also have the option to opt-out of these cookies. But opting out of some of these cookies may affect your browsing experience.
Necessary Always Enabled
Necessary cookies are absolutely essential for the website to function properly. This category only includes cookies that ensures basic functionalities and security features of the website. These cookies do not store any personal information.
Non-necessary
Any cookies that may not be particularly necessary for the website to function and is used specifically to collect user personal data via analytics, ads, other embedded contents are termed as non-necessary cookies. It is mandatory to procure user consent prior to running these cookies on your website.
SAVE & ACCEPT